The engineers at Streivor Air Systems™ set out with one goal in mind — to develop the most energy efficient commercial kitchen wall canopy hood ever.

Streivor Air Systems hoods with SmartAire™ Technology are some of the most energy efficient wall canopy hoods ever invented.

SmartAire allows a Streivor hood of any length to be segmented into individual unique hood segments as small as 24 linear inches.

SmartAire allows the airflow in each hood segment to be individually adjusted. The exhaust and supply airflow can be increased or decreased, to achieve the most optimum airflow rate for the capture and containment of effluents exhausting from specific cooking appliances installed directly under each individual hood segment.

Streivor’s Containment Panels can be added to any Streivor hood with SmartAire Technology and can achieve up to an additional 33% reduction in exhaust flow rates.

Every aspect of a hood was looked at for ways in which to improve the fluid dynamics of the air movement within the hood to enhance the capture and containment capabilities of the interior and exterior of the hood canopy. 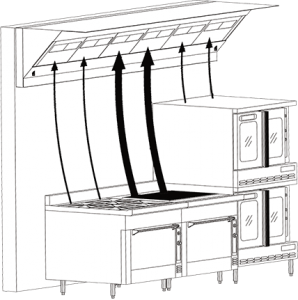 The addition of low-volume, high-velocity airstreams was researched. Once those airstreams proved to be beneficial in improving the capture and containment characteristics of the hood as well as reducing the amount of radiant heat escaping from the cookline into the kitchen they were strategically engineered into the hood design.

Another significant breakthrough in energy efficiency came as a result of Streivor Air Systems™ engineers inventing the totally new SmartAire™ Segmented Air Stream Technology. This concept allows a larger hood to be segmented into individual smaller hood segments along the length of the hood body.

A main reason that past wall canopy hood designs consumed more energy than Streivor Air Systems™ wall canopy hood with SmartAire™ was due to the fact that the minimum hood exhaust rate was determined by the hottest cooking appliance underneath a hood. That minimum exhaust rate was then multiplied by the length of the hood, without any consideration given to the other types of cooking appliances which are installed in the same cookline underneath the hood. Quite often a common cookline will have several pieces of cooking appliances that cook at lower temperatures relative to the other pieces in the cookline, yet since prior hood designs did not have the capability of segmenting the hood, the benefit of lower exhaust flow rates over the lower temperature cooking appliances could not be achieved. 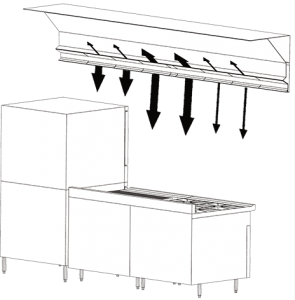 The SmartAire™ hood can be fitted with Streivor Air System’s patented ExtractAire™ high-slot, high-velocity adjustable cartridge filter to go with two adjustable airstreams which run continuously along the length of the hood.